It has been too long since any updates were posted about the status of MYTHIC. The majority of 2022 was awash in financial setbacks in the company behind MYTHIC and there were added personal issues of my own that largely kept me from making progress in getting the magazine active and on track again. This includes catching upon submissions. (I'm back to reading submissions now.)

A new issue of MYTHIC hasn't been released since early 2022. Despite the wonderful support of the Kickstarter backers and patrons on Patreon, other problems made it impossible for me to move forward. I've sorted out some of those issues, but more remain to be handled in this new year.

The biggest thing I want to announce is that I am preparing to publish the long-awaited Issue #20 of the magazine and will continue with the remaining bi-monthly issues without further delays in releases. At the same time, subscribers may still have to wait a little to receive their copies. This is especially true of print issues. But I'm working on a solution to get that aspect back up to speed.

MYTHIC #20 should be released by the end of this week.

The other item I want to report on is The Best of MYTHIC: Volume Two. The release of this collection was also affected. This second volume will be released later this month. I want to make sure that all backers and subscribers received their rewards for their support of MYTHIC.

Stay tuned because I will be back very soon with more info and updates. 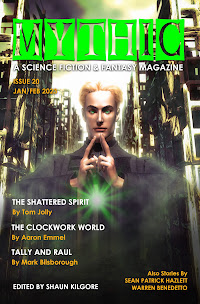